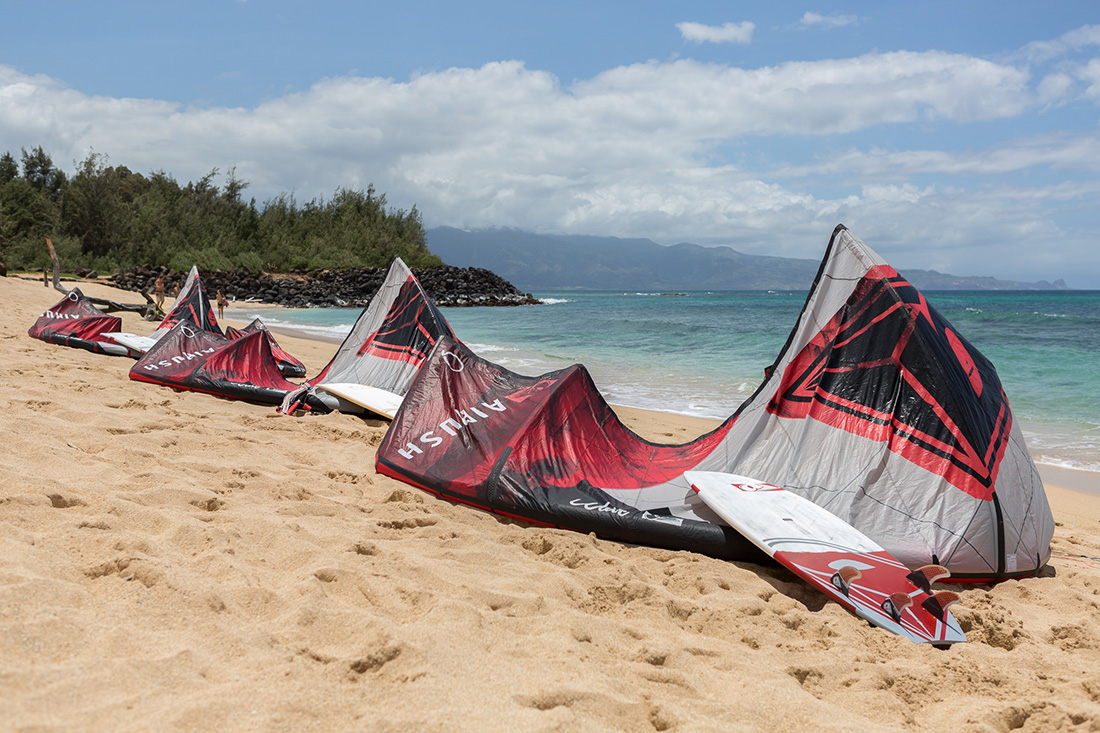 1. As one of the first dedicated wave kites on the market, what was the inspiration behind creating the wave kite?
MP – We had been working on low aspect C-Kites for a while and started to get some really good performance characteristics that were really suited to wave riding. We really wanted to make something bulletproof as well so it came along nicely in time with our Aramid load frame concept.

2. What are the key differences between the Wave Kite to the other kites within the Airush Range?
MP – The main differences are profile height and shape (Aspect Ratio) and tip chord to center chord length ratio.  The power to weight ratio is really light for its size, having quite low Dacron usage compared to something like the Lithium or Razor.

3. How does the Technoforce D2 Canopy cloth compare to the other cloths on the market and what are the biggest advantages of using the D2 Canopy?
MP – Technoforce D2 Canopy cloth has much better tear strength than other fabrics, even better than the original Teijin T9600 that was so hard to improve on.  You can feel the extra resin in the cloth and the crispiness that holds the material together for longer, also with better UV, water resistance, and resistance to flapping damage which is crucial.

4. Airush talk about the Aramid Load Frame fundamentally changing the construction of kites, why is this? Traditionally all of the load placed onto the kite was transferred through the canopy.
MP – Yeah it seems backward to try and make a thin fragile canopy cloth to take the majority of the load.  The canopy cloth needs to be so thin and light to make your kite perform and fly well, it’s so difficult to get something strong enough that lasts. With our kites, we change the whole construction by using the load frame to take the strain rather than the cloth. This means the cloth doesn’t stretch or warp out of shape when it’s been crashed and hammered, used time after time. It adds about 80 to 120 grams per kite, depending on the size. But the extra strength in the canopy it provides allows us to reduce the size of the reinforcing panels slightly to compensate for this.

5. What makes it a good wave kite?
MP – Turning speed and keeping forward speed through the turn means it doesn’t give sudden surges of power, it’s much more manageable. Still has tons of depower when you push the bar away.  The weight distribution and shape of the kite allow it to drift nicely and stay above your head rather than falling out of the sky behind you. It’s quite difficult to achieve this but still making sure the kite shoots forward to the edge of the window quickly to make unhooking easier. Usually, kites that drift well are really difficult to unhook on.

6. How easy is it to adjust to different conditions? Are there settings for onshore offshore and all-round? How does it affect the kite?
MP – It does have different bar pressure settings on the wingtips and the pigtail adjustment on the back lines allow the kite to be set up with really tight back lines for faster turning when you are hooked in 24/7.  Or you can make them longer if you are unhooking often, but that’s more for personal preference than adjusting for conditions.

The best thing about the Wave kite is that it can adapt to the different conditions simply by how you fly the kite. If you need more grunt in onshore or cross on you can fly it deeper in the window, with its quick responsive turns it uses the kites speed through the window to create more power. In offshore conditions however it’s still able to shoot forward right to the edge of the window to allow you to get a smooth turn off the top without getting ripped off the back of the wave.

7. What aspect of the kite design creates drift on a wave kite?
MP – I’ve kind of been through that in point 5, but mainly it’s the shape and weight distribution.  It’s really easy to get a kite to sit back in the window and drift well but it then struggles to keep you upwind and depower, just turns into more like a parachute pulling you straight downwind.

8. I want to travel with my kite gear and obviously at the airport weight has never been my best friend. What is the best two kite combination setup?
MP – Tough call, depends on where you are traveling to.  If you’re coming to Indo, don’t bring your 5m and if you’re kiting in Cape Town, maybe leave your 12 behind. 🙂 For light winds, the 12m and 9m will be fine, but when it’s windy, go for maybe 9m and 6m which will cover most windy conditions.

9. Is it possible to make the Wave lighter? Perhaps a one-strut design? (I loved 2011 One in waves).
MP – Yes it’s possible, we have been working on one-strut designs but it seems the market is quite focused on three-strut kites these days  Maybe in the future people will accept that your kite can work well with one strut.  The wingtip struts do also help bring the weight distribution more toward the wingtips.  On a one strut design, the center strut needs to be quite a lot larger which makes your kite heavy right where you don’t want it to be. Also for the relaunch, on the Wave kite, the wingtips are quite long in the chord and tend to flop around a lot when it’s on the water, the struts help hold it all together into a rigid shape that relaunches way easier.

10. If the Airush wave was a car, what car would it be and why?
MP – I would probably say a WRX, the ones that race on both gravel and bitumen surfaces. It’s completely at home in really big cross offshore waves but performs fine in small onshore waves as well.