The Airush Load Frame v4 featuring WebTech has been the key to setting the ultimate benchmark in durability, without compromising on weight.

We caught up with Mark Pattison to get the low-down on Airush’s kite canopy development and the Airush Load Frame technology.

Can you outline some of the key objectives and challenges with canopy development?

For performance, you want a kite to be as light as possible, it responds better, drifts better and stays in the air longer. At the same time, you want the kite to be as strong as possible. Another challenge is canopy stretch; the kite can get blown out of shape through extended use, which changes the flying characteristics, which is obviously problematic in terms of long-term performance.

The demands on the kite canopy are huge when you consider the weight of the fabric is between 50 – 60gms per square meter and less than one millimetre thick. A typical 10m kite would have around 500 grams of canopy, dealing with a working load of around 400 kilograms when under maximum stress – such as a shock load during impact. Canopies are generally made from polyester as it has the lowest stretch and does not absorb water, although it is still the most fragile part of the kite. 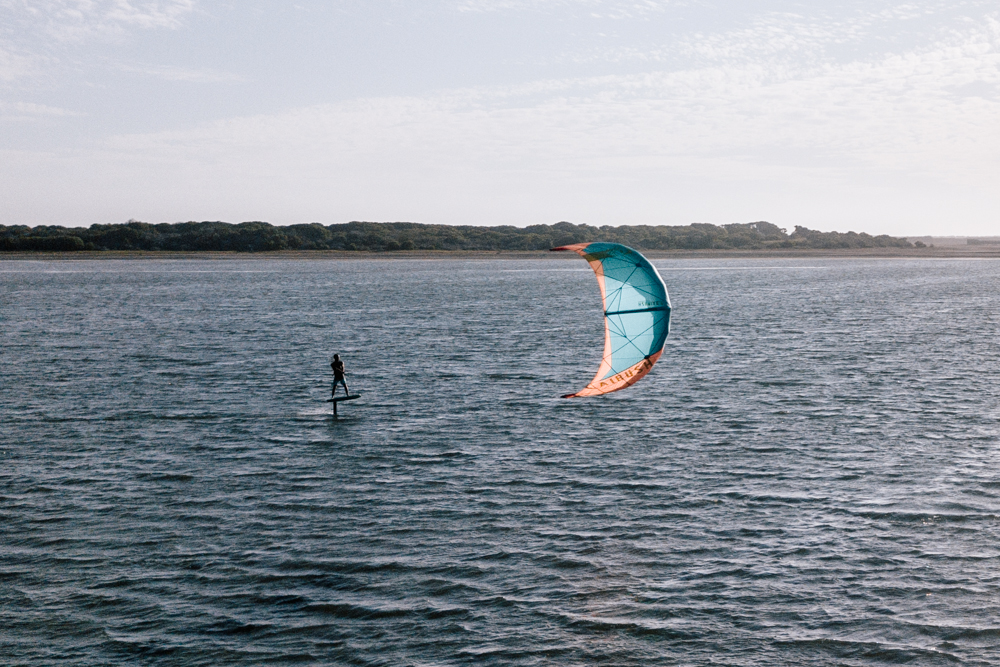 What kills canopies?
Shock load and extended use are obvious problems. But just as, or even more important, is UV damage and leaving your kite flapping.

Does the canopy material have UV stabilization on it?
Yes, there’s a coating on the fabric that limits the impact of harmful UV rays on the cloth, but due to the lightweight of the fabric, this is difficult to perfect.

What tests are done before manufacture to ensure that the materials used are consistent in their characteristics?
All the material is tested by the manufacturer and the specification is sent to us for approval. After this, the materials are independently tested and the results cross-correlated. Every batch is inspected prior to production.

All new materials will have extensive real-world testing, which is incredibly time-consuming. We typically test any new material for a year, evaluate the results across our test locations, and then make changes before starting the whole process again. At almost any point over the last decade, there would have been one or more test materials or constructions in long-term testing. We have only accepted two new canopy materials for production within this period.

Talking specifically about the Load Frame, where did the concept come from?
That is a question we get asked a lot with new concepts and innovation. From our perspective, we normally put this down to the outcome of the design team as a whole, along with input from close customers, riders, stores and teachers. We chase innovation by trying to solve a clear problem (such as durability) and ask ourselves tough fundamental questions such as whether our idea brings something new to the customer and does it really matter to them?

The concept of a load frame isn’t a new idea in the design world. It’s used extensively in sails, architecture and is a basic structural principle of distribution of planar forces through a membrane structure. What we’ve done is adapt it to suit our needs. 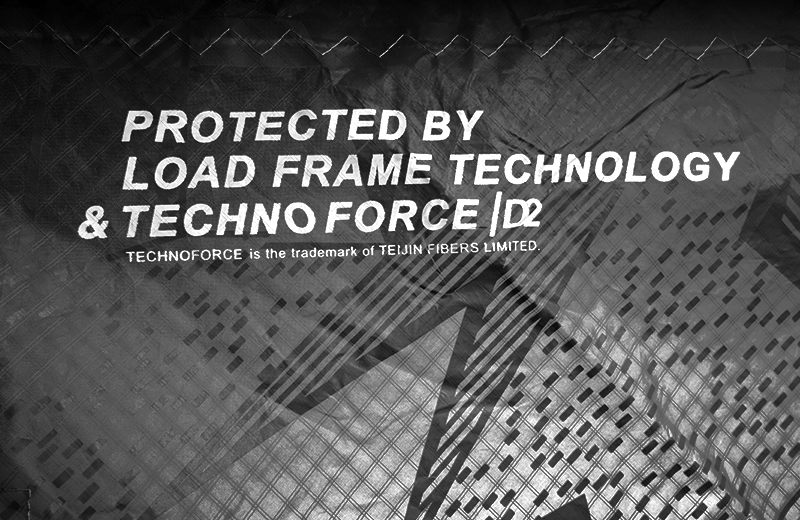 What has been the evolution of the Airush Load Frame over the years, and what have you learnt?

From carbon tape to Dyneema – The early Load Frames feature carbon tape, but over time, we found the Dyneema or UHMPE (Ultra High Modulus Polyethylene) fibers were better at absorbing impact and matching the characteristics of the canopy.

Load Aligned Frame – Over time we were able to improve the alignment of the Load Frame to increase the stability of the center of effort of the kite by locking in the draft more effectively. 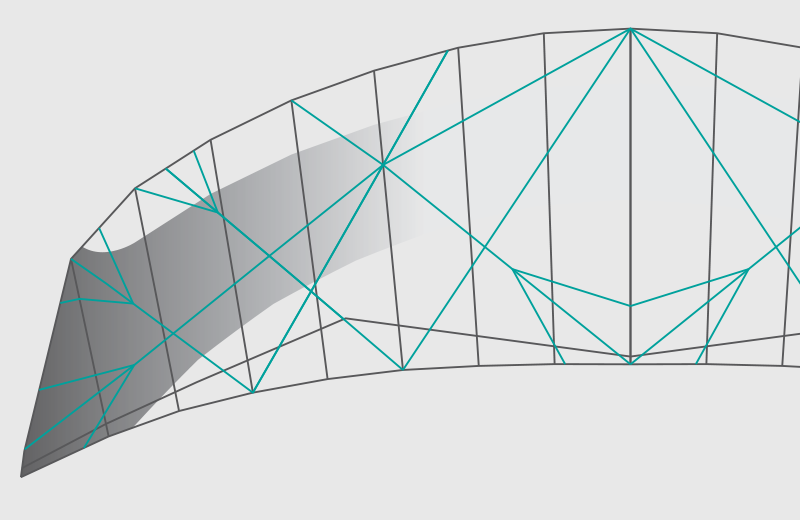 WebTech – One of the key areas of unwanted additional weight is the Dacron patches. Dacron is more than 3 times heavier than canopy cloth. Through the development of WebTech, which disperses the primary load from the Load Frame into the subframe of the kite, we are able to significantly reduce the use of Dacron and further reduce the overall weight of the kite without sacrificing performance. 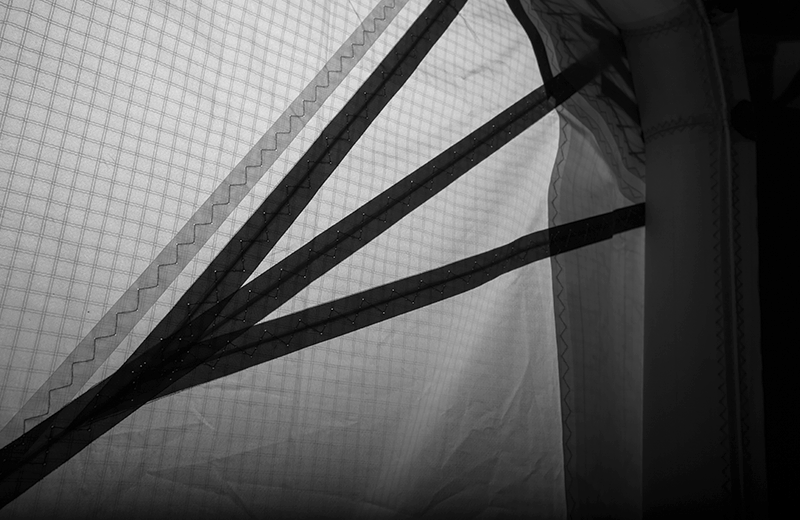 What have been the negatives of the Load Frame?

Well, it’s expensive. It adds around 10% to the selling price of the kite as the Load Frame needs to be carefully glued and stitched onto the canopy with as few joins as possible, in exactly the right place, and with the correct amount of tension. From my perspective, I look at this in terms of total costs of ownership; it’s still a big win and you get the performance advantages too.

We have had a few stores complain that it extends the lifespan of the kite so much that they’re losing rebuy customers, who would traditionally rebuy every one or two years, and are now waiting longer. Again, as long as they ultimately come back to Airush, we feel we win the long game in terms of customer retention.

You also need to keep in mind that the Load Frame doesn’t prevent UV damage or damage from flapping. As mentioned earlier, these are significant weaknesses of canopies that we haven’t been able to completely resolve – yet.

What are the ‘Naysayers’ saying?

We initially had people saying its just marketing BS, or that the Load Frame creates a weak point, or even though the kite is stronger, it’s more difficult to repair. However, over the years these comments have almost disappeared. It’s often difficult to differentiate what people actually believe from using the product themselves against a well-packaged counter sales argument they’ve only heard from one of our competitors.

People also say that it creates a ‘quilting effect’. Do you feel this is relevant?

Not really. The canopy is actually stretching significantly less with the Load Frame. It may seem more visible with the additional support, but overall, you’re getting less stretch – which is ultimately better for the fabric. Over time, the kite remains much closer to its original design shape and stays like that. Much higher speed machines such as paragliders and foil kites have extensive quilting; the benefits of the Load Frame far outweigh the perceived efficiency loss. 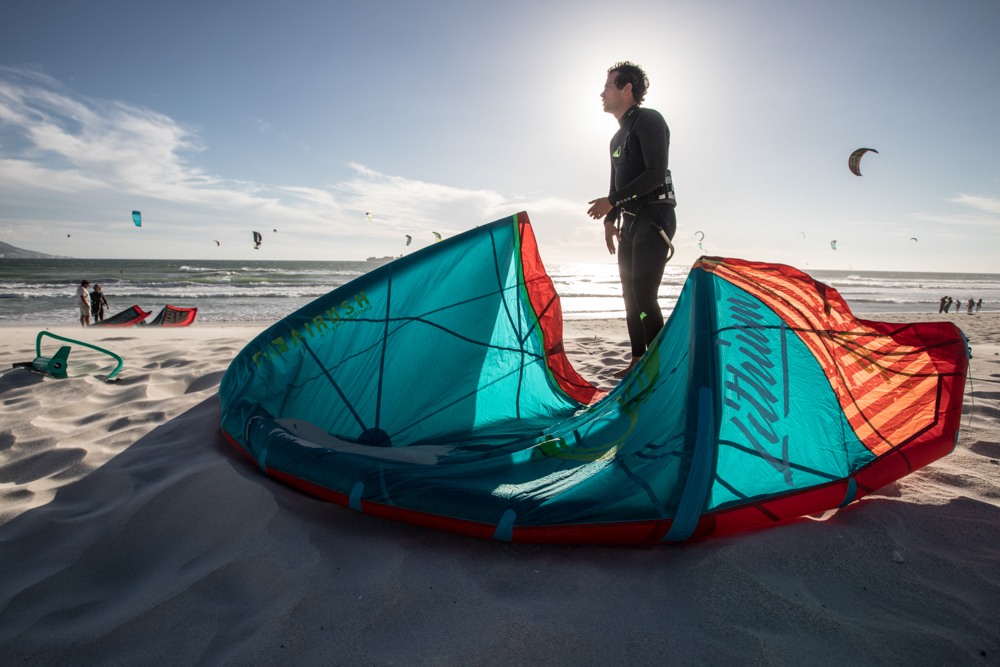 Why don’t other brands do it, is it patented?

No, it’s not patented. It was, however, extremely complicated to work through the production challenges with our production partner. It’s a concept that has evolved over time and once something is out in the public domain, you cannot apply for a retrospective patent. It’s also quite obvious, so that may also have limited the possibility of filing a patent.

I can’t speak on behalf of the other brands, as there are some good alternative solutions out there with great designers who are also trying to solve the canopy stretch problem.

The canopy materials used – are these lighter than the materials used by other brands that do not use the Load Frame? Or are they the same weight and strength?

The materials used by some of the other brands are similar in weight and strength.

What durability testing has been done?

We have done extensive long term benchmark testing, normally within some of our key school and rental locations in Cape Town, Spain, Bali and Australia.

In terms of hard numbers, what measurable benefits are there?

Due to a large number of variables with local conditions at each location and other issues such as long-term UV damage, durability testing is extremely difficult to put a specific number onto any particular kite. Our objective was to get a usable lifespan period on a kite, which we’ve found to be around double that of a similar kite without a Load Frame, and between our test centers, we believe this to be correct.

During lab testing, the stretch benefits are significant, if you look specifically at the bias stretch on the canopy (Much of the load frame is bias aligned), you will see an approximately 30% reduction in bias stretch alone. 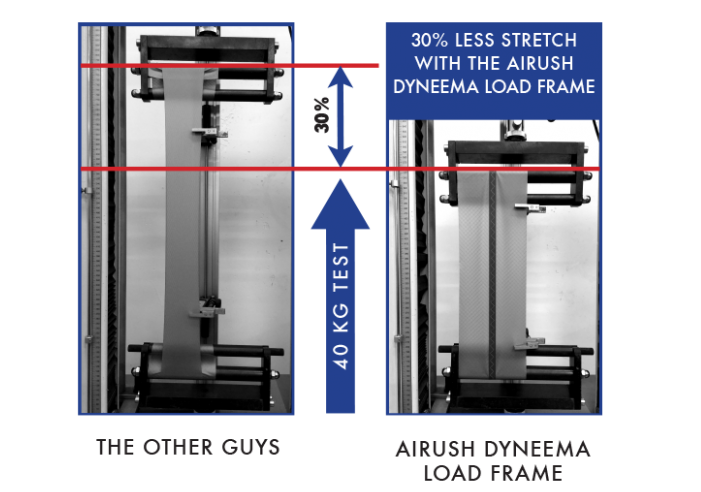 What other significant concepts has the team worked on in canopies, but have not seen fruition and where do you see the next breakthrough?

Hmmm, not sure how much I can say here as there are a few things I still have hope for. It takes a huge amount of time to develop and test concepts for long-term durability.  The other huge challenge is what can we do in production in terms of fabric that is consistent and cost-effective.

Additional UV coatings – We did a fair amount of experimentation with additional UV coatings but these added a lot of weight and ultimately the overall benefits of a heavier fabric (to end at the same given weight) made more sense. For 2019 we introduced the Lithium Progression (Which does not have a load frame) in a fabric, which is 20% heavier, this will improve the overall durability of the fabric and the additional yarn thickness will ultimately improve UV stability.

Hybrid fabrics – We have developed and tested a hybrid fabric that is Dyneema woven into the polyester yarn. Certain results were good, but the flapping tests were very far away from being acceptable and the performance not as good as we hoped. The fabric is very hard to manufacture as the two materials have extremely different characteristics.

Ultralight cloth – With the Load Frame support, we tested and prototyped with lighter cloths (around 30% lighter) but the fabric performance was exponentially worse which is not ideal.

Alternative fabrics  – As with Ultralight cloths, we have also looked at alternative fabrics such as Nylon, which is not as fragile but has more stretch. The issues have been around Nylon absorbing water and other fabrics not having consistent quality.

Laminates – We have experimented with certain laminates, and so far the durability of a very thin laminate has not been workable in a kite for commercial use. Specifically, if you consider the care needed when storing it, as it would need to be rolled and not folded much.

Of course, these are some of the angles and without a constant focus on innovation, none of these avenues is a closed-door yet. To date, we feel the Load Frame is the biggest step forward that has been made, but we will keep on pushing the boundaries.