WHAT’S NEW WITH THE AIRUSH WAVE?

The Wave has always been the go-to kite for serious surf riders, for 2018, the Wave has made larger changes than the usual incremental and refined adjustments that it always had. Kite Designer, Mark Pattison, discusses the updated features on the new Wave kite.

Why such a change in the Wave for 2018?
MP – It’s not a big change, we just found that a more angled wing tip gives more depower and less “flaring” of the wing tips, so we put it on the 2018 kite. We found the flaring of wing tips was the key aspect to address when the Wave is being used aggressively through the wind window while sheeting in and out constantly.

With the new Ultra being more ideal for drift style surf riding, where has the focus of the Wave been going towards?
MP – I think it’s just a personal preference, to be honest. For sure the Ultra works well for drift style wave riding, but the Wave also drifts really nicely, just in a slightly different way. For guys who are really familiar with the Wave kite from previous years, the new Wave is an ongoing progression with that familiar feel.

There is considerably less squared tips on the new Wave. What will the rider feel differently compared to last years with this new change?
MP – The new Wave has more “sweep” through the wing tips. The main difference is less flaring when too much back line pressure is added. We found a lot of riders are sheeting hard and aggressively so this would address this matter. It also adds more progressive depower while riding the face of the wave. It significantly improves the relaunch of the kite, which is quite critical to get out of those tricky situations. 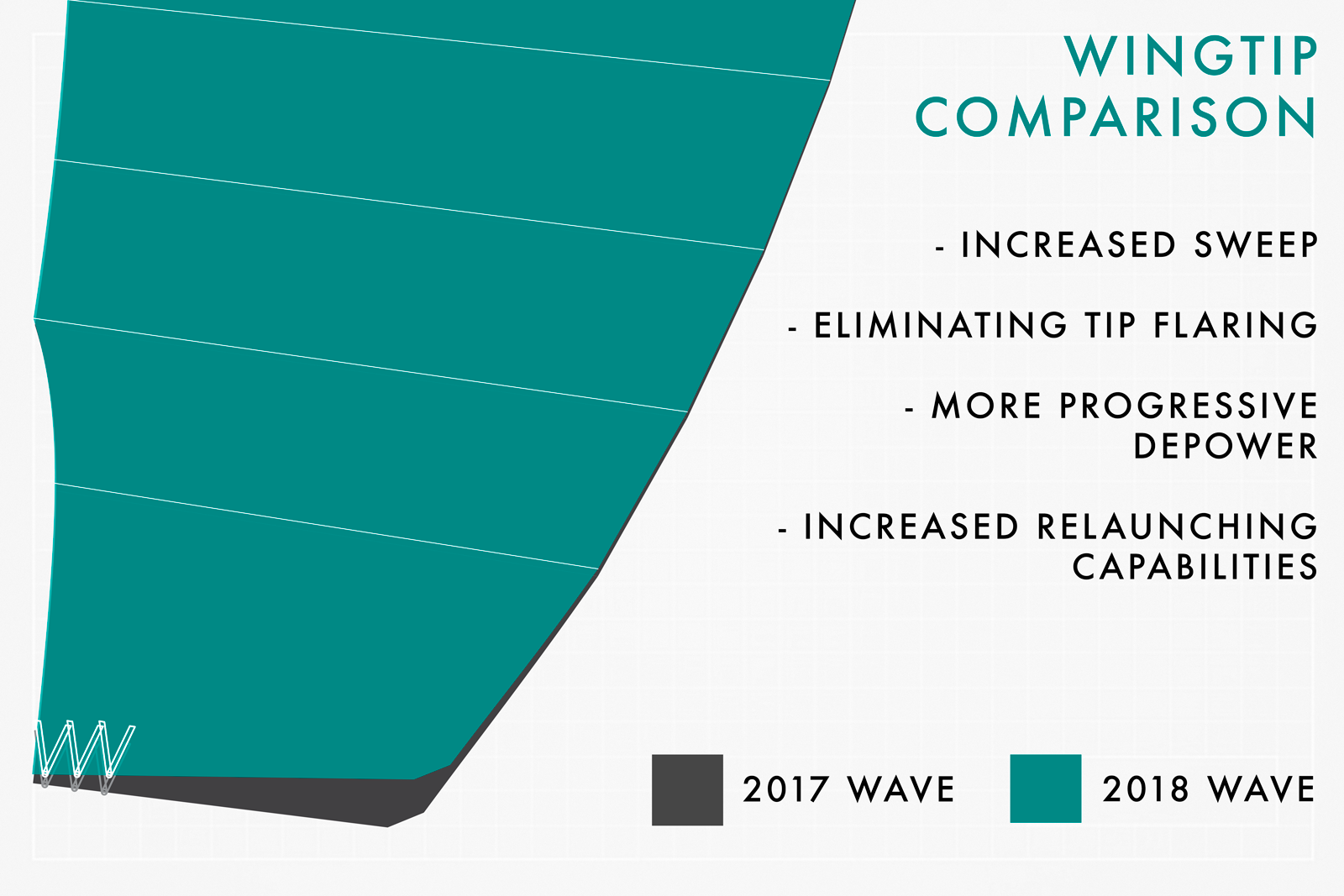 With the new Dyneema Load Frame V4 with WebTech, there is a considerable amount of weight saving throughout the kite while maintaining durability. Where will you notice performance enhancements due to the decrease in weight?
MP – Weight is almost everything in a kite, if you can reduce weight it makes SO much difference in the kite feeling more lively. It’s a fairly big reason why most people prefer their 9m than their 12m. Or prefer their 7m over their 9m. That weight reduction is super important. We didn’t reduce the kites weight by drastic amounts but increased its durability without compromising the overall weight of the kite. You will find a more rigid canopy with the new Dyneema Load Frame V4 with WebTech, which we already have been using on the Airush Ultra for almost a year now.

Where do you see the future of the Wave Kite?
MP – As it has been in the past, I think the evolution of the Wave kite will be with small incremental changes. The kite is working really well at the moment and any rider who has used them a lot seems to stick to them and prefer them to any other kite. Any big changes we make might improve the kite in some ways, but reduce some of the feeling in other ways. It’s pretty hard to make major improvements on the current design without completely changing the feel of the kite that people love.